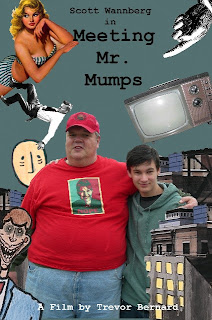 Using stop motion animation and clever editing, this short features Wannberg reading No Mercy, a poem that breaks the boundaries and sets the bar for contemporary poets worldwide. Scott without a doubt, bears the mark of a true poet; honest yet tangible emotion.
In an entertaining and creative short film; Meeting Mr. Mumps, produced by Susanne Swanson-Bernard and created by Trevor Bernard; a young poet and emerging filmmaker. Trevor, inspired by Scott Wannberg, a mentor and friend shows his dedication to poetry and film throughout this short film. Trevor clearly has a keen eye for cinematography, animation and the short includes Trevor asking Scott a series of questions briefly interrupted by Wannberg greeting neighbors and friends during the interview. Using the difficult medium of animating with glass and paper puppets Bernard was able to capture the emotion & vision of Wannberg’s No Mercy by a simple yet evocative animated character who bears the heavy burden of living and the daily struggles of modern day man. After viewing this film it is obvious Trevor Bernard’s film career is only just beginning and fans can certainly anticipate the brilliance of his next film Hold the Line.
A touching tribute indeed is Meeting Mr. Mumps… one which should not be missed.
Poet & Award Winning Filmmaker
~Apryl Skies
www.edgarallanpoet.com

Posted by Edgar Allan Poet at 5:48 PM No comments: 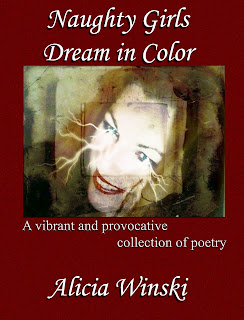 "Naughty Girls Dream in Color" is author Alicia Winski's most provacative and uninhibited collection of poetry yet. Offering poetry without boundary or censorship Winski is fearless with her love for poetry and expression.
Special thanks to artist PD Lietz for contributing to the cover art of Alicia Winski
Due for release in 2012, take a moment to view new audio on the following page:
Naughty Girls Dream in Color
Posted by Edgar Allan Poet at 7:59 PM No comments:

Edgar Allan Poet
Apryl Skies, poet, filmmaker & author of A Song Beneath Silence captures the intense beauty of the world with a unique and lyrical voice. As a contemporary poet and author, Apryl has impressed the likes of fans both online as well as by her appearances at local poetry readings throughout the L.A. area. Before entering the publishing world, Apryl focused her energy toward film with the release of her animated fairy tale series on DVD, Polyphony - Be you and Accept Me Too!, winner of the 2010 Gold Pixie Award, a 60 minute anthology of puppet adventures, clay animation, computer graphics and poetry for children. Now available worldwide. UPDATE: Skye the Troll & Other Fairy Tales For Children. Apryl Skies, creator of these inspiring and exciting series of original musings reveals a softer side with her third publication. Based on the cartoon series Polyphony – Be You And Accept Me Too!, which won the 2010 Gold Pixie Award for animation, through poetry and humor Skies creates a world of poetic fantasy and enchantment in this series of whimsical fairy tales, poetry and songs in this spectacular new children’s anthology.